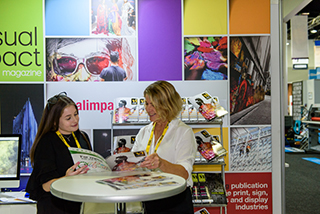 Visual Impact Trade Shows began in the early 1990s after a group of supply companies became discontented with the trade show of the time, which was run by a profit making company. This company would dictate when and where our Trade Shows were to be held. Under the guidance of David Saunders and supported by the owners of three of the larger suppliers, the Sign Suppliers Association was formed, a not for profit organisation then known as the Visual Industries Suppliers Association. The association grew from 6 members at its inception to over 100 in 2012, and continued to run very successful trade shows all over Australia.

Visual Impact has developed from different roots, until merging with Image Expo in 2005. Visual Impact is formerly known as The Sign Expo. Image Expo, formally known as Screenex, had been running for over 10 years and originally focused on the Screen Printing Industry. 2005 saw a giant step forward for both exhibitors and visitors with an agreement reached between Visual Impact Promotions and Image Expo to combine their individual exhibitions to form a partnership for future major events. The partnership provides a platform for exhibitors and visitors to be part of a larger and more diversified exhibition. Some of the industries catered for in the enhanced format include, Digital Printing, Signage, Screen Printing, Trophy, Engraving, Design, Airbrush Art, together with workshops/seminars/demonstrations relating to a number of the industries exhibiting at the show.

The Sydney exhibition is an annual event, with exhibitions held bi-annually in Queensland and Victoria. Small satellite exhibitions are held in other states as circumstances dictate.